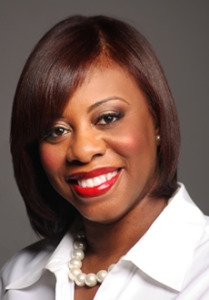 Cheryl D. Parks Ajamu, a native of Memphis, Tennessee, received her Bachelors of Business Administration from the University of Memphis. While in Memphis, she began her career as the New England Customer Service Manager for Swift Transportation (formerly M.S. Carriers), a national transportation company. She received numerous awards for her outstanding management style, client service and regional on-time delivery performance. After marrying Ihsaan Ajamu in 1996, she relocated to Michigan, and worked for a time at an advertising agency as a Project Manager. She was responsible for coordinating advertising programs and increasing dealer participation for Chrysler’s marketing programs.

Cheryl decided to pursue her interest in advertising sales, and was hired by Black Entertainment Television Publishing Group as the Detroit Advertising Sales Manager. The company was later sold to Vanguarde Media, Inc., former publishers of Savoy, Heart & Soul, Honey and Savoy Professional magazines. Her responsibilities included not only securing advertising sales in four (4) magazines, but also brand management, sponsorship acquisitions, promotions, community relations and budget management for Michigan. Her meticulous work ethic and exceptional client service raised the bar in relationships between diversity publications and the automotive advertising industry. In 3 years, she had increase automotive revenues by over 50% for Vanguarde Media, Inc. Cheryl was named Savoy magazine Salesperson of the Year in 2003.

Cheryl is the Creator and Executive Producer a diversity themed luncheon, the Multicultural Media Luncheon, held during the North American International Auto show in Detroit, Michigan (NAIAS). Launched in 2011, the Multicultural Media Luncheon is an Academy awards style event honoring ethnic groups for their achievements in the automotive industry; a celebrity with expertise in marketing and branding is selected as the keynote speaker. This event has been called the most prestigious event during NAIAS press week by industry insiders. She is the first African American female to produce an event during NAIAS press week in Detroit.

Cheryl is a member of the Adcraft Club of Detroit and the Multimedia Representatives Association. She is an event and fundraising volunteer for Orchards Children’s Services, a foster care agency in Southfield, Michigan. She also mentors several young women in Michigan, Memphis, Chicago and Atlanta.  Cheryl Parks Ajamu is one of the recipients of the 2019 University of Memphis Top Tigers Award for Outstanding Alumni.